All around the world on national hemp month we celebrate the roaring comeback of one of the world’s most versatile plants – hemp. Although they both belong to the cannabis family, hemp is often commonly confused with Marijuana plants (weed) and one can be forgiven as they are very similar in appearance, but their uses are a lot different.

HOW IS HEMP DIFFERENT FROM WEED?

“Marijuana” is a term used to classify varieties of Cannabis that contain more than 0.3% THC (by dry weight) and can induce psychotropic or euphoric effects on the user. This is the illicit stuff that you smell coming from the guy who lives next door moments before a pizza delivery arrives at his door. If you want to know a bit more about weed consumption, look no further than Chris Tucker’s role of smokey in the film, Friday. (Which is a classic!)

“Hemp” is a term used to classify varieties of Cannabis that contain 0.3% or less THC content (by dry weight). Meaning these varieties of cannabis are non-intoxicating and is harvested for industrial use. Hemp induces no psychoactive effects on the user – meaning no euphoria nor the munchies. Sounds pretty boring compared to its sister plant, eh? However, whatever your vices are you cannot ignore that Hemp has heaps of practical uses which have been documented in the history books, many moons ago.

THE HISTORY OF HEMP.

Depending on your knowledge on the topic of Hemp, you may be shocked to discover that hemp has been cultivated by man for over 10,000 years! Yep, you read that correctly and no, we have not been smoking anything funny, many believe that hemp was the first crop ever cultivated by mankind! Hemp has been dated back to ancient Mesopotamia and China – with many different applications of the plant discovered over the years. In fact, it is known to have over 50,000 different uses. 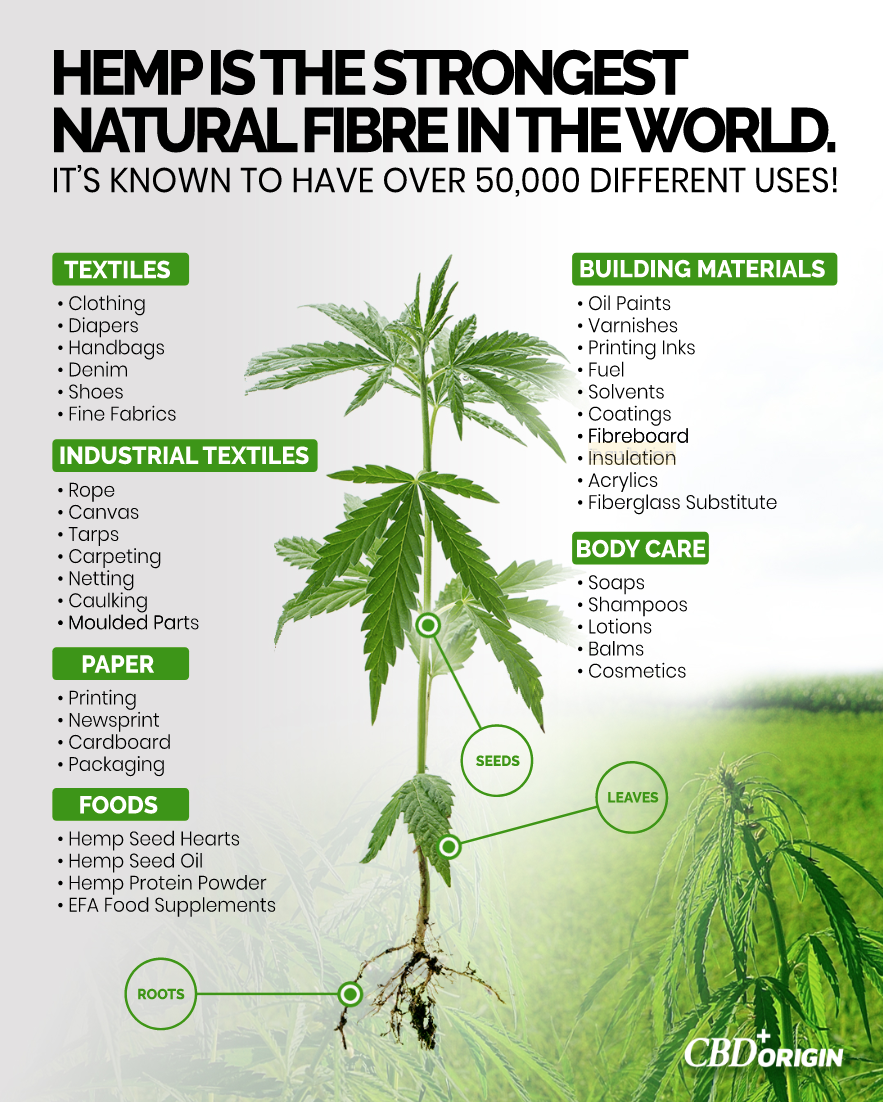 WOW! IF IT WAS SO USEFUL? WHY WAS HEMP OUTLAWED?

The Marijuana Tax Act of 1937 strictly regulated the cultivation and sale of all cannabis varieties. The Control Substances Act of 1970 classified all forms of cannabis, including hemp, as a Schedule I drug. The question remains to this day as to why?

Conspiracy theorists maintain that when there was the invention of the cotton gin, hemp was quickly forgotten about as it was much cheaper to produce cotton for textiles and it was a far more comfortable material. However, in the early 1900s, George Schlichten introduced an invention called the Hemp Decorticator – providing a new, much easier means of processing hemp. Things were looking up for the hemp industry, but things were far from rosy… as years of negative propaganda conducted by wealthy businessmen with their own agendas then quickly followed.

After almost a decade of negative stories about cannabis plants, the Marijuana Tax Act was proposed to congress on 2nd August 1937. The act did not criminalise the possession or use of hemp, cannabis, or marijuana – but certain provisions were enforced. Hemp farming was eventually banned totally in 1970 when it was classed as a Schedule 1 drug via the passage of the Controlled Substances Act.

If we fast forward to the year 2020, hemp is now legal in most parts of the world – meaning there was a massive surge in Hemp or CBD-infused health & well-being products. Unless you have been living under a rock for the past few years, you will have seen CBD products somewhere along your high-street! There is all kinds of stuff available on the market nowadays – e,liquids, skincare products, sprays, tincture oil drops, edibles, hemp seeds… the list goes on and on! So, the question remains; what exactly is it? And is it just another retail trend disguised to take our money?

WHAT IS CBD THEN?

CBD (short for cannabidiol) is a chemical compound which is extracted from the hemp plant. Whilst THC (the stuff that gets you high) is the major ingredient in marijuana plants, cannabidiol is obtained from Hemp plants that contain very minor amounts of THC. CBD doesn’t get you high or give off any psychoactive effects – but has proven effective in relieving symptoms of the following health conditions:

When you consider it’s many benefits, it’s easy to see why CBD is one of the fastest-growing (pun intended) industries of modern times. It’s estimated that the global CBD market is expected to ‘accelerate to $23.6bn’ over the next five years according to a Grand View Research.

Regardless of personal opinion it seems pretty apparent that Hemp and CBD products are here to stay for the foreseeable! Let us now celebrate the awesomeness Hemp has to offer us this month of July. Hemp Hemp Hooray!